On a recent trip to San Diego I had the pleasure of meeting up with the President of Synergy Companies (www.synergycompanies.org).  His company not only installs enerworks residential solar hot water heaters but he is also a personal customer of enerworks solar water heating.  We were working with Jasen, one of his local technicians, to optimize the energy savings of his system when he offered to show me what he was working on in his office.

What David showed and explained to me was really impressive.  It was a whole home energy monitoring system which not only monitored the energy his Photovoltaic system put onto the electricity grid but also showed which appliances in his home were consuming energy and at what time of day they were consuming that energy.  It turned out that David is very close to Net Zero energy consumption for his home and the last significant barrier to achieving this was the electric water heater as it was the largest consumer of electricity left after all other home improvements.  With just a 50% reduction in electricity consumption for his water heating David will start to see a Net Positive energy production to the grid.  We left David and Jasen with some suggested improvements to help achieve this target.

While I was impressed with everything I saw, I am perhaps most impressed with David’s “Big Picture”. Synergy Companies plans to launch this whole home energy production and monitoring package to home and business owners once he’s satisfied with the water heating energy reduction.  In what many consider the worst economy in recent memory, David and his company Synergy Companies are investing a great deal of money and time to perfect this whole home Energy Production and Monitoring system.  While this project has been in the works for some time, it turns out that forward thinking companies like Synergy Companies may end up being rewarded handsomely for their hard work.  It turns out that many in California expect the energy efficiency standards to be tightened every three years until they reach a Net Zero requirement in 2020.  It would appear that in the very near future David’s work may not just be the exception, but the rule.  I would encourage you to check out their business and sustainable building options at www.synergycompanies.org.

If you’re in San Diego and enjoy Thai Fusion food I would encourage you to check out a restaurant in the Gas Lamp district called J-Wok (www.jwoksd.com).  The food was fresh and tasty and the service was very friendly.  They’ve also got an amazing piece of art on the wall which is a giant tree limb made out of wooden chopsticks (yes, even the trunk). 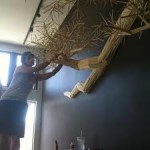 One Response to Partner and Customer